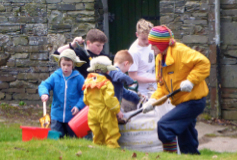 20-22nd Jan 2017. The Friends group re-routed a stream down by the lake to stop erosion near the south jetty. They also cleared debri in the woods stream pre-hydro plant commission.